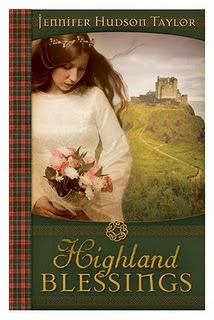 Did you know, that much like in hair, make-up, and music, trends exist in the publishing world? Oh yes, we writers are subject to “What’s Hot, What’s Not” lists as much as aspiring fashion designers.

What’s “Not Hot” in Christian publishing right now? Sci-fi, Westerns, Medievals, to name a few. In fact, I heard a report that the sales figures on Judith Pella’s one and only Medieval was half that of her normal books. Which is very sad for me, having already written one and a half medieval novels. So, I was very excited about the pending release of Jennifer Hudson Taylor’s Scottish Medieval romance, Highland Blessings, by Abingdon Press.

Highland Blessings is set in 1473. Now some may say this is too late in history for a Medieval novel, but the simple fact is, while the Renaissance began in Italy in the 1400s or even earlier, it took much longer to reach other parts of Europe, particularly the Scottish Highlands. All of the cultural elements we associate with the Middle Ages, stone castles, armor, flying pennants, are still firmly in place at this time. Add to that plaids, clan lairds and feuds, and the stage is set for a fun story similar those written by CBA author Kathleen Morgan.

Akira MacKenzie is kidnapped on what should be her wedding day by Bryce MacPherson to keep a promise he made to his dying father, in hopes of settling a long-standing fued between their two clans. He wishes for Akira to wed his brother Evan, Laird of the MacPherson’s, but when Evan is killed, the plan changes.

At first Akira is crushed to be abandoned by her family into the hands of the MacPhersons who detest her, but quickly comes to realize that they are not so different, and begins to suspect that this may have been God’s plan all along. However, Akira and Bryce both have many obstacles to overcome to achieve peace between their clans and trust between one another.

While I felt this story had some small technical issues, overall I enjoyed it very much. By far, my favorite element of this book was the spiritual aspect. Akira is truly a woman of God to be admired. She puts aside hurt and unforgiveness in order to submit herself to God’s plan. In addition, she is open to the spirit of God and known for her prophetic dreams. She speaks them forth boldly despite the danger of being thought a witch in her superstitious culture.

Congratulations to Jennifer Hudson Taylor on her debut novel. Here’s to hoping this is just the start for her career and for Medievals in general. It’s time the market took notice of this exciting and underrepresented time in history.
Posted by Dina Sleiman at 5:16 PM