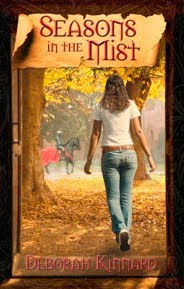 I've spent the last two weeks traveling. Fictional traveling that is. My favorite kind. No layovers. No leg cramps. No time changes. No gastrointestinal disorders. Thanks to the creative mind of novelist Deb Kinnard, I've been enjoying a fanciful trip through the Middle Ages. And I had a top-notch tourguide, 21st century medieval historian, Bethany Lindstrom. So I just had to invite Deb to come and talk more about my favorite time in history.

Here's the basic idea: stranded in 1353 cornwall, American graduate student Bethany Lindstrom knows she must find a way back to her own time or face a life of falsehoods and peril. But with the stern overlord Sir Michael Veryan, she is swept into the intrigues of King Edward's court, which will test their mettle and their faith in God to the limits -- and forever bind their lives together.

Welcome, Deb.  First of all let me ask, why do you write historical novels?

LOL, I suppose for the same reason Sir Edmund climbed Everest--"because it's there." I'm fascinated by the middle ages and have been since I was a teenager, so it seems natural to try to tell some of their stories.
You have also written contemporary novels. What is different about the experience?

Research, mostly. Some facts we take for granted when writing present-day characters and stories are more difficult to get to, when writing in another era. For example, when were forks first used? How did medieval physicians and herbalists use the plants they knew as healing? All sorts of things. The answers are not always easy to find, but always fun to dig into.

I couldn't agree more. Seasons in the Mist is a time travel novel. That fascinates me. I love time travel novels, but I think I would be afraid to tackle one. How did you make this work for a Christian book?

I felt at first that I must "explain" time travel in a Christian context. Then as I got deeper into the story, I realized that some questions, for us in real life as well as for my characters, are unanswered and it's His best judgment for us that they remain so. My hero asks why so many died in the pestilence--this is an answer my 21st century character doesn't have, and I don't have my characters "solve" the question. So it is with time travel. They agree that God is sovereign and He does many things we puny humans cannot comprehend. They leave it at that.

And I admit, you made it work well. I think the smartest thing you did was making the main character a medieval historian. That was a really nice touch. But why did you choose this period?

Because I know it best and love it best. I've written a Regency romance, but better not ask about that one. It stinks, big-time. I don't know the period well enough, and that book remains forever in the bottom drawer.

It's obvious that you really have a grasp on this time. I admire that. For me, it was sort of the opposite, I knew a little about it, but I wanted to learn more. Probably what drew me to it the most, was that I was interested in learning about life before the Reformation. Tell us about the spiritual climate of this time period.

It was an era in England when virtually everyone believed. Imagine, if you can, an age in which reverence and fear of God was universally understood. People in England were either Christian or Jewish. There were few if any who did not know God. Contrast that with the age we live in -- the only answer is "whew!" Granted, some "believers" were nominal and some in their hearts had secretly fallen away. But virtually all people were part of the church and expected to follow the Lord.

Yes, one of the subjects I deal with in my writing is the differences between nominal Christians, corrupt elements in the "church," and true heart felt believers. I discovered that many during this era had instensely personal relationships with Christ. Can you share any interesting or off-beat facts you discovered about this era?

I had to dig quite deeply simply to discover what language they spoke. Did the upper classes speak French? English? How much French did the middle and lower sort of folk understand? Since this was a transitional age, linguistically, those answers were surprisingly difficult to find. I settled with my characters speaking English, with an occasional French or Cornish phrase thrown in, and I think it works.

I found that interesting. I think having a 21st Century protagonist narrating allowed you to dig deeper into the language than I did. I just sort of treated Middle English like a foreign language, but having Bethany there to translate and give us a break with her contemporary thoughts was a big help. I chuckled when she described one of the characters as a surfer dude. Does the book have any themes or messages inspired specifically by this time period?

First and foremost it's a love story, so I didn't intentionally go for deeper truths. However, Bethany is a believer who has left God behind, and I think one of the reasons she must travel in time is to rediscover the bright fire of faith. The reader, I hope, will get the idea that God is infinitely creative about bringing His children to Himself, and loses no opportunity to call us back!

Amazing concept Deb. I think our Inkwell audience will enjoy this trip back in time as much as I did. Thanks so much for visiting with us today.

* Deborah Kinnard started writing at age ten, frustrated because there was no preteen girl with a horse on Bonanza. She earned two degrees in health care and has enjoyed a career that encompasses Spanish translation, volunteer work at a crisis line, years in assorted ERs, and a day job at a big Chicago teaching hospital. Deb keeps busy with reading, playing the guitar, participating in a church outreach team, and skiing in the winter.
You can order Seasons in the Mist at http://amazon.com/ or http://cbd.com/
Posted by Dina Sleiman at 5:49 AM