Stuck in the Waiting Room

Last week a writer friend of mine, Ann Tatlock, posted something on facebook about those who were in "the waiting room." Yep, that was me. Boy did I relate. I'm sure you know that feeling too. That slightly anxious/kind of bored/a little bit excited feeling of waiting for something to happen. Writers are all too well acquainted with this feeling. We wait for agents, then we wait for publishing contracts, only to wait another year or two until the book comes out.

This time around, I actually wasn't waiting for book stuff, (well, I guess I was, but that wasn't the big one on my mind.) I was waiting to hear back about some job interviews I'd had. I felt like both of them went well, but of course I had no idea about the other applicants. Plus, both jobs involved contingencies that had nothing to do with me. And to top it off, I was also told by both potential employers that if the job comes through and they choose me, to be ready to start right away.

(Get tomorrow's work outfit ready, make sure everything else I can possibly get ahead on is done, and commence thumb tweedling once again.)

Sigh. Waiting is not fun. So how ironic that just the week before I had posted a positive message on my facebook page about waiting. 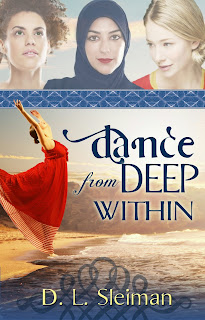 My latest novel, Dance from Deep Within, will release sometime around mid-November this fall. This will be my third published novel, but it's actually the second one I wrote. In fact, a reasonably decent version of this novel was finished three years ago. Talk about a waiting game. My first agent wasn't sold on this book. After talking to a few experts, I changed the primary protagonist of the book from the blond to the Muslim. That newer version was actually the book that caught the eye of my current agent, but she wasn't sure if she could sell it.

We shopped it around for almost two years. One well known publishing house actually held onto to it for over a year, asked about it again, and still didn't give us an answer after another six months.

Finally, long after the novel I actually wrote after this one came out, my agent and I decided to go with a small press, WhiteFire, to publish Dance from Deep Within. And, the truth is, I'm glad for the wait. I'm a much stronger writer now.

But more importantly, after years of begging people, just a few weeks ago I was finally able to get a former Muslim woman to read this book and provide feedback. Now don't get me wrong. I did my research. A Christian expert on Islam from the Middle East read it and approved the content. And the European wife of a former Muslim also read it for me. So my major details were all in place. But this former Muslim woman helped to catch a lot of subtleties about how Muslims think. She helped me to better understand their motivations and the significance of traditions I didn't fully grasp like Ramadan and their ritual washing.

Yes, the waiting was worthwhile. This book is so much better than it ever could have been in 2010, or 11, 12, or even earlier in 2013. As much as it hurt at times, I'm thankful that God made me wait. So how will my current wait turn out? Who knows? But I will keep believing that it will be worth it.

Have you been in the waiting room lately? What do you do to get by?
Posted by Dina Sleiman at 6:49 AM