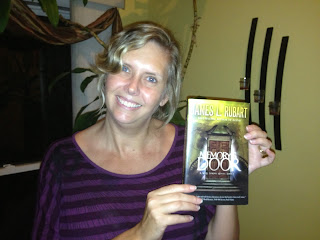 This week I received in the mail a much anticipated sequel. But let's look back for a minute to January when I took the bold step of declaring Soul's Gate by James Rubart my new all-time favorite novel (The Christy Awards apparently agreed it was great, because it won its category). Months later, I am more than willing to stand by that statement. You can see my review of Soul's Gate here. At the end of the review I actually went so far as to say this, "Honestly, I'd much rather you read this novel than one of mine." And I'm still willing to stand by that statement as well. (Although I'd really like it if you'd read mine too ;) The reason being, I think the best fiction challenges you and truly affects your life, and Jim's books are guaranteed to do that while taking your on a thrilling journey you will never forget.

So when Jim mentioned on facebook that he was looking for people to help him spread the word about his sequel, Memory's Door, I jumped right on that opportunity. This week I received my shiny new copy with glee. I'm about halfway through it, and I am not in the least bit disappointed. Although I didn't rush through it in a twenty-four hour read-a-thon, it is because there is too much to be savored and mulled over. It is as enthralling as the first book of the series, and jam-packed with spiritual insight.

Why don't I let Jim tell you a little bit about his series himself?

I'll be back next week with my official review of Memory's Door. In the meantime, if you haven't read Soul's Gate yet, (what in the heck are you waiting for?!?!) I highly suggest you get started there. While each book in this series contains a complete story and can stand alone, you will enjoy them best and be able to better appreciate the subtle nuances if you read them in order.