The Good Girl by Christy Barritt


A little over a year ago, I took a road trip to Charlottesville with my good friend, author Christy Barritt. We went up for the Virginia Festival of the Book, and for me to check out the setting of my last novel, but had lots of time to talk about everything under the sun. Christy has actually been one of my writing mentors over the years, and as usual, she had lots of wise counsel for me. We also discussed one of her books and the possibility of her publishing it with WhiteFire, which I represent as an acquisitions editor.

It seemed like a perfect fit, an edgy chick-lit mystery novel with romance, but I barely dared to dream. This was Christy Barritt, after all. Award-winning, multi-published author. So when she came back to me later in the spring to officially pitch the idea to WhiteFire, I was ecstatic. And Roseanna White was equally ecstatic. Since we’d both read and loved Christy’s similar Squeaky Clean Series, it was a no-brainer. We accepted the book on proposal only, and in record time.

And Christy did not disappoint. I had the privilege of being the first to read The Good Girl, and it was about as perfect as you could imagine. Here’s the official blurb: 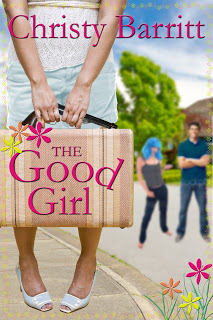 What's a good girl to do when life goes bad?

Tara Lancaster can sing Amazing Grace in three harmonies, two languages, and interpret it for the hearing impaired. She can list the Bible canon backward, forward, and alphabetized. And the only time she ever missed church was at seventeen because she had pneumonia and her mom made her stay home.

But when her life shatters around her and her reputation is left in ruins, Tara decides escape is the only option. She flees halfway across the country to dog-sit, but the quiet anonymity she needs isn't waiting in her sister's house. Instead she finds a knife with a threatening message, a fame-hungry friend, a too-hunky neighbor, and evidence of...a ghost?

Following all the rules has gotten her nowhere. And nothing she learned in Sunday School can tell her where to go from there.

I love everything about this story. For starters, my favorite style of mystery is the sassy, humorous, chick-lit variety, and it doesn’t get any better than this. Tara's blue-haired friend is hysterical, and there's a super fun reality TV element. Yet the story is full of suspense, according to one reviewer, almost turning a thriller at the darkest point. You won’t be bored for a second. And the romance is great too.

But by far my favorite aspect of this book is the spiritual thread. I love this story of a girl who has done everything right, yet her life still goes wrong. Surrounded by a cast of colorful characters, Tara begins her search for a very real and relevant faith, taking the reader along her journey. I’m sure this book will touch many lives, and I’m so thankful that I got to be a part of bringing it to the reading public.

Have you ever done everything right, only to have life turn wrong anyway? How did you handle the situation? What do you think of a possible ghost in a Christian novel?
Posted by Dina Sleiman at 5:46 AM