In the late 1700s and early 1800s the waltz was considered quite a scandalous dance. It gained popularity on the European continent by around 1780, but was still scorned in respectable circles in England and the United States. It wasn’t until the Prince Regent introduced the waltz at a ball in 1816 that it was accepted in England. As for the newly formed US, all we can say for certain is that it was a standard dance by 1830. 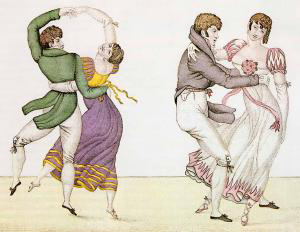 For my new novel, Love in Three-Quarter Time, I assumed that as in all things fashionable, Americans would have followed close on the heels of their British cousins. I showed the waltz being introduced to Charlottesville, Virginia, by a trend-setting plantation matron in 1817. But the waltz of the Regency (or in this case late Federalist) era was quite different than the waltz we know today. It was closely related to the cotillion, and it incorporated a variety of handholds that could, in fact, turn a bit risqué in the wrong company.


Here are just a few lines from a very lengthy poem called “The Waltz,” written by Lord Byron in 1813.


Endearing Waltz! -- to thy more melting tune
Bow Irish jig and ancient rigadoon.
Scotch reels, avaunt! and country-dance, forego
Your future claims to each fantastic toe!
Waltz -- Waltz alone -- both legs and arms demands,
Liberal of feet, and lavish of her hands;
Hands which may freely range in public sight
Where ne'er before --- but --- pray "put out the light.
"Methinks the glare of yonder chandelier
Shines much too far --- or I am much too near;
And true, though strange --- Waltz whispers this remark,
"My slippery steps are safest in the dark!" 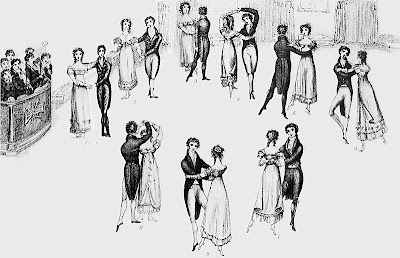 The waltz of that time was not the gliding Viennese Waltz or the boxy American Waltz we might be familiar with from dance shows today. It began with a side-by-side promenade called “The March,” but then moved into “The Pirouette” section which involved a variety of holds, some of them quite intimate and hip to hip, with hands linked overhead. The dance then moved into the quicker, hopping "Sauteuse" and"Jetté" portions, but always returned to the sensuous pirouettes. Unlike other dances of its time such as cotillions, minuets, reels, gavottes, and country dances which allowed only fleeting contact, the waltz allowed for extended body and eye contact between the partners. These holds allowed ample time for gazing into the partner’s eyes and…shall we say, conversation?

As in Colonial days, dance in the Federalist Era was an essential part of high society life. One’s ability to dance played an essential role in one’s good standing in the community. Little wonder my Mrs. Beaumont was in such a tizzy that her twin daughters were about to be launched into society and she couldn’t secure the best dance instructor in Virginia. And once she did find a suitable teacher, enter my heroine Constance Cavendish, little wonder that Mrs. Beaumont desired to wow her peers by being the first to thpresent the waltz in her area.

Thomas Jefferson, who makes a cameo appearance in my novel as a retired president and resident of Albemarle County, once wrote that dance “is a healthy exercise, elegant and very attractive for young people.” And as Jefferson spent much time in France, I surmise he would have enjoyed a good waltz himself.
I had tons of fun playing with the idea of introducing this “scandalous” dance into the polite society of the planter elite class in Albemarle County, Virginia. I hope you have fun reading about it as well. If you’d like to get a peek at the Regency Era waltz, check out this video. The filming quality is poor, but it’s the only one I could find that shows one of the more questionable holds.

For more on the waltz, check out my novel, Love in Three-Quarter Time, only $3.99 for ebooks.
Posted by Dina Sleiman at 6:44 AM