The History of Love in Three-Quarter Time

I have a confession to make. I’m not really a history person. At least not in the typical sense of dates and facts, rulers and wars. What I love would probably be referred to more as humanities. I enjoy cultures. The art and architecture and literature of a people group. What did they believe? What made them tick? What music did they live their lives to? In my new historical romance novel, Love in Three-Quarter Time, I had the opportunity to fuse some of my favorite cultures into one novel.

The Regency period generally refers to the reign of the Price Regent in England in the early part of the 1800s. That’s about as much of the history as interests me personally. But oh the culture! Classical music, ballroom dance, card games, drawing rooms, empire fashions, and a feel of unsurpassed elegance. While my book takes place in the frontiers of America where manners and customs are not nearly as strict as in England, since many of my characters have English roots, it still contains a lovely Regency feel.

Perhaps the Regency influence is best seen in the importance of the waltz. At the time, being an expert at dance was a true marker of high society. While the waltz had been popular on the continent of Europe for years, it was considered scandalous by the conservative Brits and their provincial American counterparts. All of that changed in 1816 when the Prince Regent officially introduced the waltz at a ball. I never was able to pin down a date when it came to America, but as it was well established by the 1830s, my guess is that some brave soul must have introduced it shortly after it became popular in Britain. 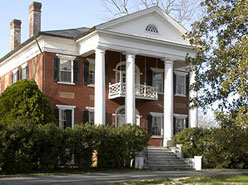 Most of Love in Three Quarter Time takes place on a southern plantation near Charlottesville, Virginia. Of course this allows for a gorgeous Georgian style mansion, balls, tea on the verandahs, and horseback riding through rolling hills. However it also brings up the tricky topic of slavery. While serious historical novels that face slavery head on and show the full ugliness of the institution can occasionally find a place in Christian fiction, in a genre like historical romance, one must tread lightly. For my novel, I chose to have three of my main characters involved in the abolitionist cause. In addition, at the plantation where the novel is set, slaves are treated kindly, like family.

I felt both of these elements were important to provide an enjoyable exploration of this time for my readers. In this way, the reader does not feel the need to excuse the institution for the sake of the characters, nor are they constantly being brought down by the sadness deeply engrained in the Southern lifestyle. However, I do not avoid the ugliness when it’s important to the story. The abolitionist cause does play an important role in the plot, and by the end, I think the readers will have a greater appreciation for those who fought to end the institution of slavery in our country. I also believe that the inclusion of African-American culture in this book brings depth and heart to the situation.

Being so close to what was still considered the frontier of America in 1817, my novel also explores elements of Native American culture. Perhaps my most exciting find upon researching for this book was the Black Indian tribe. The Black Indians were a mixed race group of people that included many runaway slaves. That might give you a hint as to how I wove this people group into the plot. They adopted the Indian lifestyle and hid themselves away in the mountains of Virginia. The most famous Black Indians were a Monacan tribe near Bear Mountain in Amherst County. I moved my village slightly north to facilitate my story, however the Monacans did reside throughout the Shenandoah Mountains. I use the Indian culture in my story to allow my passionate heroine an opportunity to break free from Regency customs and explore her more earthy side.

My primary spiritual advisor in this book is an enigmatic circuit preacher named Lorimer. Because he’s been called to minister to the slaves and Indians, he has a unique perspective that draws from both cultures as well as the more British Anglican and Methodist teachings. Of course, all of his personal beliefs are based upon his intensive study of the scripture. This brings a very rich and vibrant sort of spirituality to the book that draws Constance closer to Christ, and I hope it will draw my readers closer to him as well. In fact, the reader has the opportunity to explore Christian worship services of all three groups along with Constance.

I had a fun time merging these cultures in my Jane Austen meets Scarlet O’Hara novel! Of course it took a little creativity to blend all of this history together, so please forgive me if I ever let my imagination lead me astray. Overall, I think I managed to capture all three influences, and I think that you’ll have as much fun with them as I did.

Which culture do you know the most about, Regency, Southern Plantation, or American Indian? Which do you like the best? What is your favorite culture?
Posted by Dina Sleiman at 6:20 AM