3-4God went for the jugular when he sent his own Son. He didn't deal with the problem as something remote and unimportant. In his Son, Jesus, he personally took on the human condition, entered the disordered mess of struggling humanity in order to set it right once and for all. The law code, weakened as it always was by fractured human nature, could never have done that.

The law always ended up being used as a Band-Aid on sin instead of a deep healing of it. And now what the law code asked for but we couldn't deliver is accomplished as we, instead of redoubling our own efforts, simply embrace what the Spirit is doing in us.

Sin. Kind of an ugly word. A charged word to be sure. Maybe it’s been overused. Maybe we apply it to anything we don’t like. We certainly don’t want to apply it to ourselves, but truth be told, we probably do it in some way or another everyday. From my understanding, there are two Hebrew words for sin. One means evil. Hopefully not too many of us are guilty of that. But the other one--the simpler one was known as “het” or “chet” in Hebrew. It means missing the mark. Veering of the path. Missing God’s best plan for our lives.

Yep, I’d say most of us do that every day.

And no one understands that more than God himself. He made us after all. And He knows us intimately. Although I don’t think it would be fair to say He “planned” for us to sin, I imagine He “knew” it was going to happen. For the record, I don’t think God is the control freak most Christians seem to think He is. I happen to think He has given us a ton of choice and more responsibility for our own life than the whole “God is in control” mind set seems to acknowledge. Oh, and that there’s an enemy too, who seeks to destroy us, and as we saw in verses one and two, we’ve been given power over that enemy.

Anyway, back to verses three and four. So mankind fell into sin. And it created a degree of separation from God, but He wasn’t numb to our plight. He had a plan. And not a wimpy little plan. No, it says here He went for the jugular by sending His own son. A son who died for us on a cross to pay the price for our sin. Pretty amazing. God took a personal interest in our human condition. Why? Because He loved us. He wanted to fix this disordered mess once and for all. 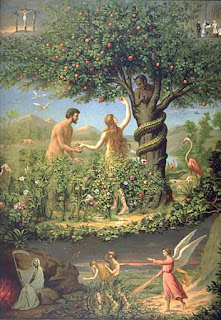 Laws—rules, they could never fix the mess. They weren’t enough to earn us salvation. To restore our relationship with God. And guess what? They still aren’t. We don’t need the band-aid of the law anymore. What we need is the deep healing that Christ offered on the cross. We don't need to accept Christ's salvation once and then earn our own salvation everyday for the rest of our lives. We just accept Christ's salvation, and it's done.

So why do we spend sooooo much time trying to fix ourselves, control ourselves, be perfect, please people, live up to some impossible religious standards?

Now we get to my favorite part of these verses. We don’t have to try harder. We don’t have to redouble our efforts. We just relax and embrace what the Spirit is already doing in us. If we’ve accepted Christ and His forgiveness, it’s God’s job to fix us. Not our job. His!!!!

We just have to hold on for the ride.

Wow! How freeing is that? Take a minute to feel that freedom. Breathe it in. Shake off the heaviness of guilt and sin and live in the moment of liberty and forgiveness. Of spiritual health and well-being. No wonder that dark cloud from verses one and two has been blown away and now we can live under clear, bright skies. Sigh. Lovely.


Have you been redoubling your efforts lately? Have you been stressing over your sin? How could you simply embrace what the Spirit is doing in your life? What would that look like?
Posted by Dina Sleiman at 6:19 AM