Hi, friends. Here is a funny little post I think you will enjoy from my friend and fellow author, Michelle Griep. Be sure to read about her awesome newly released Viking novel at the bottom :)


Top 5 Reasons to Admire a Viking
1. Sweet Texting Skills
The Viking alphabet, the Futhark, is a series of straight lines. Super easy to carve into a stick, a skull, what-have-you. Much of their communication has been unearthed by archeologists, down to shopping lists, threats, and love notes.
2. Viking Men Put Metrosexuals to Shame
Contrary to popular belief, Vikings were a meticulously clean and well-dressed people group. Unlike the English, they didn’t hold any ridiculous superstitions about bathing opening the door to demon possession. Once a week they soaked in their bubble bath and daily combed out their hair. Clothing was bright and fashionable, often incorporating imported silks and furs.
3. Debt Free Living
These people paid their debts and paid them fast—or were kicked out of the country. Everything had a monetary value, even a life. If you killed someone, you had to reimburse the deceased’s family (called wergild).
4. CEO Determination
They knew what they wanted and went after it. Gold and silver, mostly, though land was high on their list as well. And if a Viking showed up on your doorstep, you’d probably better cooperate. They employed ruthless practices such as the ‘blood eagle’ (I won’t go into detail to spare the squeamish at heart, but let’s just say this activity involved surgical skill, bone cracking, and organ removal).
5. Packers Suck
Enough said. 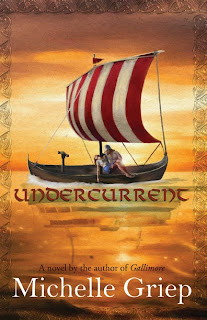 Now that your appetite is whetted for big, beefy Vikings, there’s a book you really shouldn’t pass up. Take a trip back in time and experience these wild and winsome people in UNDERCURRENT…
People go missing every day. Many meet with foul play, some leave the social grid by choice, but others are never accounted for. Such is the fate of successful linguistics professor Cassie Larson. She leads a life her undergrad students hope to attain, until she tumbles into the North Sea and is sucked into a swirling vortex…and a different century.
Alarik, son of a Viking chieftain, is blamed for a murder he didn’t commit—or did he? He can’t remember. On the run, saving a half-drowned foreign woman wasn’t in his plans.
Ragnar is a converted pagan shunned by many but determined to prove his Cousin Alarik’s innocence. He didn’t count on falling in love with Cassie or the deadly presence of evil that threatens his village in Alarik’s absence.
UNDERCURRENT…dare to be swept away. Available now at Amazon or Risen Books
Posted by Dina Sleiman at 11:06 AM