Exploring God in All His Shades and Textures

All my life I dreamed of writing “the great American novel.” So, some might find it surprising to learn that I did not set my first novel in America.

I think the reason goes back to my four years spent at Oral Roberts University. There the campus pastors drilled into us that we should not think of ourselves as American Christians, but rather as World Christians. Citizens of the globe, reaching out to others without discrimination. People who did not base their views on ethnicity or patriotism, but rather considered the good of the whole world in their decision making. I guess I took that a step further by choosing a husband from Lebanon. And when my sister married a man whose parents hailed from India, we became one seriously international family.

Perhaps another reason I preferred a foreign setting is because I love that sense of traveling through fiction. When I read, I want to experience new places, cultures, and mindsets. I want to learn something about people who think and act differently than I do. I want to discover something unique about what it means to be human, and consequently to unveil more about the God who made us all in his marvelous image.

So, when I finally did sit down to write that great American novel, I didn’t feel restricted to placing it within our fifty states. The whole world stood open before me, ripe with possibilities.

My first consideration as I chose the setting for my book was that I wanted a time predating our current religious schisms and prejudices. A time when everyone was a Christian, but being a Christian didn’t always mean much. A time before the Protestant Reformation. That pretty much meant my book would be set in Europe. I choose England because much of my ancestry is British, and I had spent a summer there during a college missionary trip.

As the story began to unfold in my mind, I realized I needed a year when feudalism still existed, but when the middle class was beginning to emerge. I wanted my heroine to be born a peasant tied to the land, but I also wanted her to have the ability to rise above her circumstances. And since I wanted her first memories to be of suffering through abject poverty, I needed a famine.

So I settled on Sussex, England beginning in the famine year of 1315. The story continued to unravel before me. Dandelion would begin in Sussex, but would experience a journey of discovery through this romantic coming of age story. She would search the world over looking for the true meaning of love. First the nearby castle, then on to London. And she needed a sea voyage, perhaps to…Italy? Yes, Italy in the 1330’s as the Renaissance began to dawn would be cool. 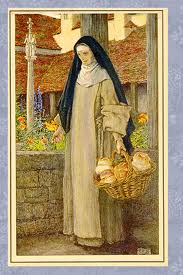 Searching for the true meaning of love in Italy. Wait a minute. Weren’t some of my favorite medieval mystic poets from Italy and Germany during this time period? I looked it up, and yes they were. St. Catherine of Siena, St. Therese of Avila, and Hildegard von Bingen all wrote intensely passionate love poems to God within two hundred years of my story. Dandelion definitely needed the influence of women like that if she was going to ever discover the meaning of love. And so my fictional nunnery was born outside of Florence, Italy.

Of course, these odd settings aren’t the easiest sell in the CBA market. In fact, if someone had told me that medievals didn’t sell well before I had started mine, I might have reconsidered the decision. But I’m glad I wrote it in blissful ignorance. I love the setting. I love the way I was able to use it to bring to light unique aspects of man’s relationship with God, and I love the rich, musical language it permitted.

Yes, Dance of the Dandelion was a hard sell. Several big houses gave the book serious consideration but turned it down over the medieval time period. But eventually, I did find a publisher. I feel so blessed to have connected with WhiteFire Publishing for this project because they share my love for exotic settings, and they are willing to take risks. They embrace the vision that birthed this book: to explore God in all of his many shades and textures.
Posted by Dina Sleiman at 5:27 AM