This spring has been all about the world of Young Adult fiction for me. It started when I had the idea for a YA historical series, and I have loved my foray into this genre. Why? Admittedly, some of the heroines seem a little immature to me, but much about these books resonates in a universal sort of way. On the secular side, they are clean, action-packed, and not afraid to ask the hard questions about life. On the Christian side, they are actually edgier and more real than many of their adult counterparts. Put bluntly, teens won't tolerate any b.s., and since I won't either, YA fiction is a great fit for me.

I'm going to quickly take you through some of the books I have read, not only this spring, but in the last year in the YA genre.

In the Christian world Melanie Dickerson, Lisa Bergren, and Anne Elisabeth Stengl are some of the big stars. I've been enjoying Melanie's great fairy tale retellings for years, so I didn't actually read any this time around. You can find them in our Inky archives, though. I read Lisa Bergren's Glamorous Illusions last year and liked it, but didn't really connect with her River of Time series, although many of my adult friends loved it. As for Anne Elizabeth Stengl, I had a hard time getting into Heartless, but her vivid imagination and beautiful voice kept me reading. And I'm so glad I did. I was completely impressed by the gorgeous allegory in this story.

Perhaps my biggest surprise was to learn that a book I stumbled on last year and looooved, Prophet by R. J. Larsen, is considered Y.A. I gobbled up this book in just a few days and enjoyed every word. I was mesmerized by her strong, courageous, spiritual heroine. I've been looking for an excuse to buy books two and three, and never even realized they were Y.A. until my agent mentioned it to me. (By the way, my agent knew this because she also represents R. J.) These books are called speculative, but I would describe them more as fantasy set in the Biblical era. Whatever they are, they're awesome, and I highly recommend them. 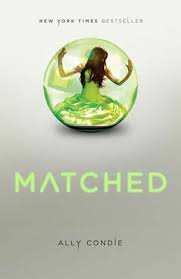 In secular fiction, I found I have a real penchant for YA dystopian fiction. Of course I started with The Hunger Games series. Read them straight through. I could easily do a whole post about how they inspired me to find my inner strength and stand against injustice. I have to admit, though, that I wasn't crazy about the existential ending to the whole series. It was kind of a downer. Although the ending was realistic, I'm sure I wasn't the only one who wanted something more triumphant. I'm working my way through the Matched series, which I've really enjoyed so far, and I also want to check out some other books which begin series including The Selection, Divergent, and Delirium. I've read samples of each, and they all look promising.

I also gave Twilight a try, something I probably wouldn't have done if it wasn't for research purposes. This book did have a special sort of magic. I couldn't put it down. And yes, it's romantic on an epic scale. While the vampire element seemed completely fantasy-like and didn't bother me, I cannot in good conscience recommend it, especially not for teens.

I felt the message of the book was that love conquers all, even if your boyfriend is inherently evil. Therefore, I felt girls could use this as a justification to get involved with destructive individuals like abusers and addicts. In fact, Edward's craving for Bella's blood is flat-out described as an addiction. There's a very real possibility he might kill her. The impression is given that playing with fire is somehow romantic. Here are just a few dangerous quotes I collected. But don't worry, I'm essentially a selfish creature. I crave your company too much to do what I should." ~ Edward. I refused to be convinced to fear him, no matter how real the danger might be. It doesn't matter, I repeated in my head." ~ Bella. I'm here, which roughly translated, means I would rather die than stay away from you. I'm an idiot." ~ Bella. While I don't think the author had bad intentions, I also do not think she fully thought through her responsibility to her young, impressionable readers.

And I can't finish without mentioning that I've been reading an in-progress YA dystopian by my good friend Gina Welborn. Whoop! Whoop! It's so great, I can't wait for her to finish and find a publisher so you all can read it. I'll also keep you posted on the status of my own YA novel, the first in a series of action-packed medievals featuring strong female characters in traditional male roles.

What YA novels have you found and loved? Any you wouldn't recommend?
Posted by Dina Sleiman at 5:19 AM