The Fashion of Love in Three-Quarter Time

In just a few short months my new novel, Love in Three-Quarter Time, will be released. The novel takes place in Virginia in 1817. While America was settling in as a nation, off in England this period was known as the Regency Era, an era well-loved by romance fans for the works of Jane Austen. And just as well-loved for its beautiful fashions. As I was choosing the year for my book to take place a number of considerations came into play. One concern was that I wanted my heroine to dress comfortably without the horrors of corsets, hoops, and bustles. That meant Regency fashion. For most of the next hundred years, fashionable women's clothing will be quite unbearable. So enjoy a quick tour of some of the lovely, free-flowing Regency costumes that inspired this book.


Heroine Constance Cavendish will wear this gown in rose instead of yellow for the climactic big ball. She won't be wearing that weird thing on her head though, and knowing Constance, she's sure to loose her gloves by the end of the night.

Constance's mother and her sister Felicity are brought to Charlottesville from Richmond to make special gowns for Mrs. Beaumont and her twin daughters for the occasion. To the left is Mrs. Beaumont's dress. She's the mother of hero Robert Montgomery by the way. And to the right is the gown worn by the twins. Molly's is blue and Dolly's is pink as shown here. 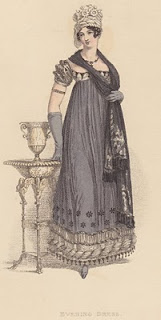 Of course they won't always be dressed up. This period is best known for the basic white muslin day dress with an empire waist. 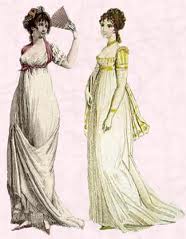 And we can't forget about the men. While their clothing is not quite as fun, it is important as well. Notice that his pants are full length at this time. Also note the hair and the thick mutton chop sideburns, although only my most fashionable fellows will bother with those details. 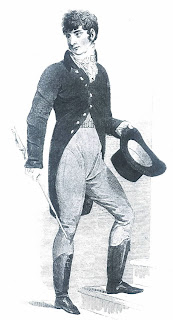 Robbie Montgomery is more often dressed like a simple farmer than the dandy above. His normal outfit consists of simple brown breeches, a work shirt, and worn Hessian boots. As the story takes place close to the frontier, I also had opportunities to include mountain man and Indian clothing, such as the fringed buckskin outfit below worn by the handsome and quite manly circuit-preacher, Lorimer. 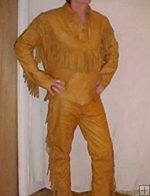 I hope you enjoyed this little tour of the fashion found in Love in Three-Quarter Time, and I hope you'll enjoy the book even more. For more fashion from 1817, check out this great blogpost. http://nineteenteen.blogspot.com/2010/11/fashion-forecast-1817.html

Which outfit shown above is your favorite and why?